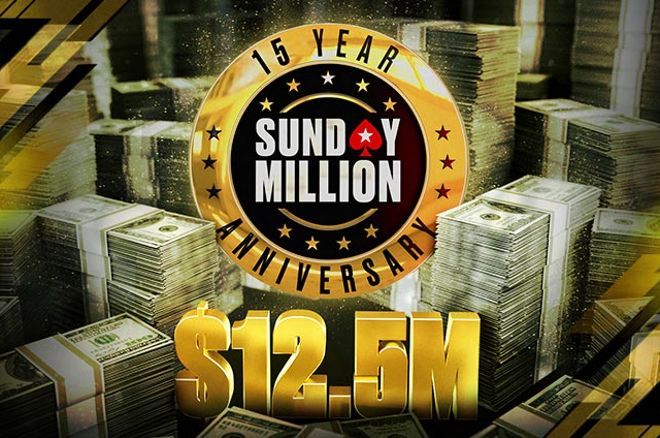 It’s hard to believe it has been 15 years since the first Sunday Million at PokerStars.

The buy-in has been increased from $109 to $215 to bring it back in line with what the buy-in was for many years.

Don’t worry if the $215 is too much for you to spend in this “can’t miss” event as there are many ways for you to qualify for a fraction of the cost or even for free!

Read on to learn three paths to qualifying for the Sunday Million at PokerStars.

Head to the NEW PokerStars Hub

Want to stay up-to-date on all the latest PokerStars news right here on PokerNews? Why not try out the new PokerStars Hub!

The most traditional path for qualifying to the Sunday Million cheaply is via satellites and feeder tournaments.

You will have plenty of time to qualify as there are plenty of qualifiers already in the PokerStars lobby for you to get your ticket for a fraction of the cost.

Direct qualifiers start at a very affordable $2.20 but, of course, these won’t be paying out many spots as this is just one-hundredth of the $215 buy-in.

There are Mega Sats at a variety of buy-ins from $5.50 to $55. The $22 level might prove to be the most popular with at least half a dozen guaranteeing a whopping 100 seats each!

There are also feeder tournaments into many of the direct satellites starting at just $1.10, so there is really no excuse not to try to play what will likely be the biggest Sunday Million of the year.

Playing a Spin & Go can be a life-changing experience with the possibility of playing in a three-max sit-and-go that features a prize of 10,000-times or even 100,000-times the buy-in.

PokerStars has introduced Special Edition Spin & Go’s for the Main Event at the $4 and $22 buy-in levels that can also prove to be life-changing experiences as not only do these tournaments offer the chance to win a Sunday Million ticket where you can literally become a millionaire but also you have a remote shot at winning $1 million directly as well.

Just ask Jamie Nixon if you don’t think this path can lead you to glory. At the end of last year, Nixon famously tilt-entered a $75 Special Edition Spin & Go and won an EPT Online High Roller ticket. He then ran deep in the $25,000 buy-in event before bowing out in eighth place for $71,387. Not a bad return for $75!

PokerStars is giving away $500,000 in satellite tickets in the Sunday Million Anniversary Ticket Machine from March 8-21.

All you need to do is opt-in to the challenge and you can earn up to five tickets into a draw the following day where you can potentially start your path to the $12.5M GTD Sunday Million 15th Anniversary for free.

The challenges each day are the same and for many should prove easy to complete. Here’s a look.

Now is the perfect time to be playing at PokerStars with the $12.5 million guaranteed Sunday Million 15th Anniversary event just around the corner!

You can qualify for free but you will obviously need an account at PokerStars to do so.

If you don’t have an account, download PokerStars via PokerNews to get your hands on a lucrative welcome bonus worth up to $600.

Create your free PokerStars account, make a deposit using the bonus code “STARS600” and PokerStars matches your deposit 100 percent up to $600. In fact, your first three deposits in the first 60-days after creating your account are matched up to a combined $600.

You then have four months to release as much of this bonus as you can by playing real money poker, including cash games, tournaments, and even Spin & Go tournaments.

The Stars Group is a majority shareholder in Oddschecker Global Media, the parent company of PokerNews.