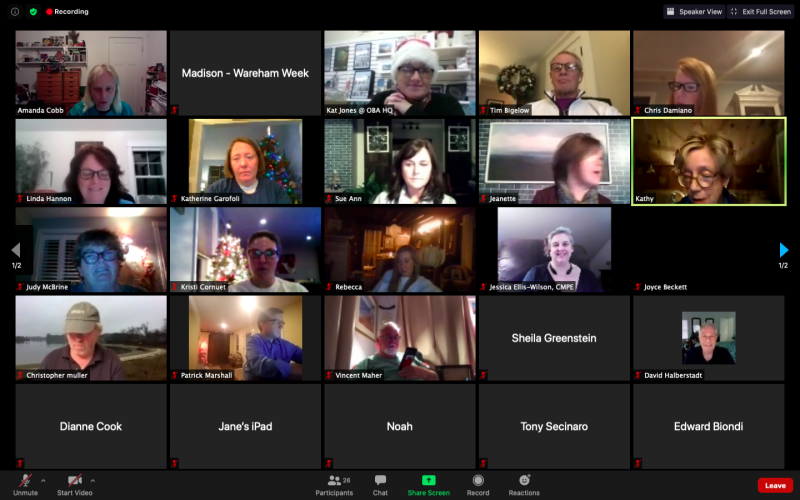 Although 2020 has looked nothing like the year the members of Onset Bay Association imagined at the outset, the group reflected on the variety of ways they managed to contribute to the community this year with pride during their annual meeting on Monday, Dec. 7.

While the stated focus of the annual meeting was the association’s 2019 performance, the challenges and triumphs of 2020 frequently became the topic of discussion because members were proud of their achievements.

Concerns about the pandemic and fundraising constraints forced the Association to cancel many of its flagship events in 2020, including the Fourth of July Fireworks, Midsummer Shakespeare, the Summer of Love Concerts, the Canal Cruise and Kayak Poker Run, Sandcastle Day and several others. But the Association was undeterred.

“Part of the great thing about the Onset Bay Association … is that we’re able to reinvent things on the fly,” Board Chair Amanda Cobb said at the meeting. “That has been, obviously, the unfortunate theme for most of this year. But we still managed to get some things done and some fun things going on even if it had to be reimagined a little bit more than we would have liked.”

One example was when the Association banded together over the summer to clean up the busier-than-ever Onset beaches.

“Early on in the summer, we started noticing a huge trash issue,” Cobb said. “We actually were able to mobilize a group of about two dozen volunteers. … People picked up cans and emptied just untold numbers of trash bags into the dumpsters on the pier.”

The Onset Bay Association also conducted a fundraiser featuring Onset’s most picturesque doors. A local photographer captured images of 28 doors in Onset and created posters and greeting cards using the photos. Cobb said the posters and cards have been “selling like hotcakes.”

The Association typically holds a Christmas event each year, and plans to do so this year as well. Jeanette Geribo, a member of the Association’s board who co-chaired the Christmas in the Park event in 2019 and 2020, said the organization learned a lot from the 2019 Christmas event planned to improve on past years for the 2020 event. Of course, she said, that was before the pandemic hit.

Despite the focus on the impact of the pandemic on recent operations, the Onset Bay Association’s 2019 accomplishments did not go undiscussed.

Kathy Judd, a member of the Onset Bay Association Beautification Committee, said 2019 was a busy and productive year for the committee.

“We were able to redesign Dudley Brown, the town took down a couple of dead trees, we planted new trees and new shrubs, we had the memorial replastered and painted, we did some planting on the corner of South Boulevard and Onset Avenue across from Mark Anthony’s,” she said, before adding that the organization was also able to purchase more Christmas decorations for Onset Village.

The 2019 Kayak Poker Run event saw record levels of participation, said Patrick Marshall, a member of the association board who typically runs the event.

“It’s a great opportunity for people to see Onset from the bay itself,” Marshall said. “I think 2019 was our largest participation level since we started it back in like 2000 or something.”

More than 50 people participated in 2019, and Marshall said he hoped the event would be back on in 2021.

Cobb said that some have expressed concern about the Association’s financials because of the pandemic. She explained that the situation would require some work, but wasn’t dire.

“The fact of the matter is, we have obviously not been able to do the degree of fundraising that we usually do,” Cobb said. “But we also haven’t been spending the kind of money that we usually spend on events.”

With this in mind, she said the organization was “doing just fine.”

“Once we get into 2021 and start hitting our stride with figuring out what events we are going to be able to offer, we are going to really hoof it in terms of fundraising — especially for the fireworks, but also for everything else,” Cobb said.

The group also began looking ahead to 2021. Members mentioned a number of events they hope to revitalize and reimagine so they can be held in a pandemic-safe fashion.

Cobb thanked the Association’s donors and sponsors, various town departments and officials and the volunteers.

“(The volunteers) have been absolutely fabulous and stuck with us through thick and thin,” she said.