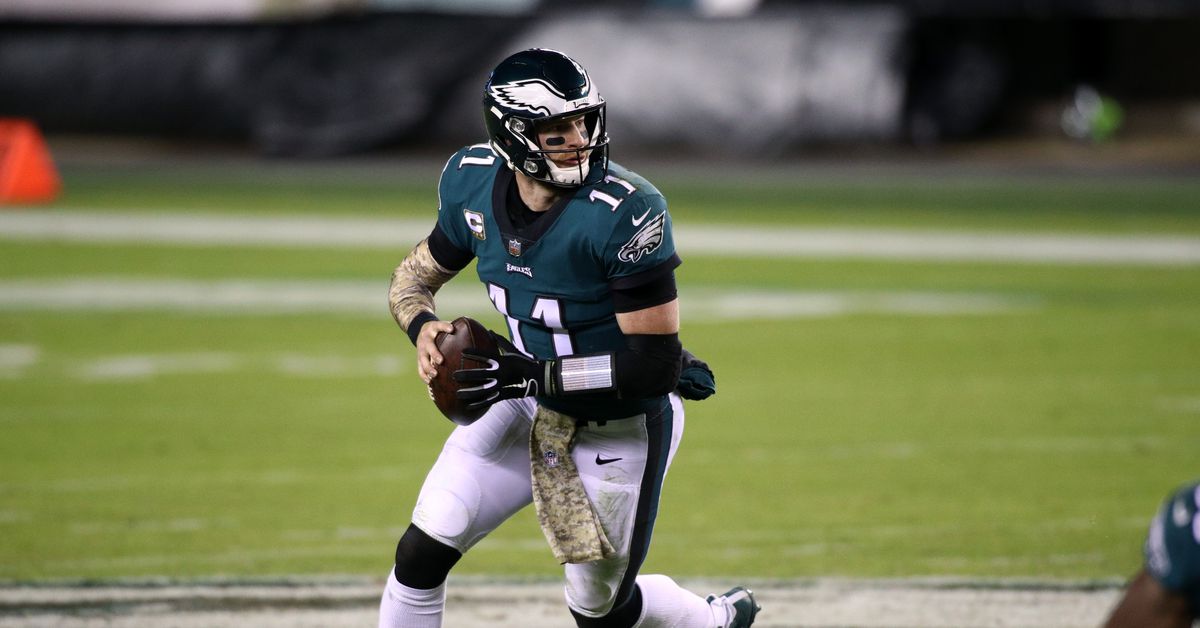 It’s Week 10 in the NFL, and it’s once again time to survey each game for value player props. I’m backing three different quarterbacks to go over their passing yard totals and putting my money on a newly-acquired star to have his breakout game. Here are my favorite prop bets on DraftKings Sportsbook.

You’d be hard-pressed to find a team that a player likes facing more than Carson Wentz likes facing the New York Giants. Time and time again, when Wentz needs to get back on track, a game against his division rival will give him the positive momentum he needs. Over his career, he’s 7-1 against Big Blue with an average of over 272 yards per game, and just two weeks ago, he torched this Giants secondary for 359 yards and two touchdowns. Yes, he’s averaging just 235.4 yards per game, but this is historically a great spot for Wentz and he’ll be welcoming back Alshon Jeffery to a depleted Eagles receiving corps. Mix in the fact that the Giants’ passing defense ranks 28th in DVOA and you’ve got yourself a great bet.

Only two quarterbacks this season have failed to eclipse 300 yards against the Seahawks’ secondary: Nick Mullens and Kirk Cousins. While we’ve all said some pretty unsavory things about Jared Goff over the years, I think we can all agree he’s a few cuts above those two when it comes to throwing the football. Jamal Adams’ return to the lineup somehow made Seattle’s already-awful passing defense, which is dead last with 362.1 yards per game against, worse! He posted the worst PFF grade of his career in last week’s loss to the Bills and also had a spat with Pete Carroll on the sideline. This defense is in disarray; attack it.

For two straight weeks now, every single member of the Buccaneers — from coach Bruce Arians to receivers coach Kevin Garver to general manager Jason Licht — has said nothing but nice things about Antonio Brown. They’ve continued to talk about how he looks great in practice, he’s doing everything that’s asked of him and Licht even went as far as to say they took “no risk” in signing the veteran. This team has put far too much faith behind Brown publicly and taken too much of a beating in the media after last week’s loss not to try to get AB going. They will give him the ball plenty, just as they did against the Saints when he had five targets. He actually looked like Brady’s best option at times, and I think his breakout game is coming any moment. Remember, in their only game together last year in New England, Brady targeted Brown eight times. They’ve got a connection.

It seems ridiculous that Baker has only hit his over three times during the season, yet here we are. He’s been looking a lot better, surprisingly, since Odell Beckham Jr. went down with a knee injury, finding Jarvis Landry and Rashard Higgins a lot more. He’s coming off a down game against the Raiders, which is a bit discouraging, but I still love the buy low spot here. The Browns are going to come out motivated, needing this win, and they will find an easy time against this Houston defense. The Texans rank 27th in completion percentage against and 30th in total yards allowed per game, and I don’t see those rankings improving after facing Cleveland. This is the week Baker makes it happen.

Put your knowledge to the test. Sign up for DraftKings and experience the game inside the game.