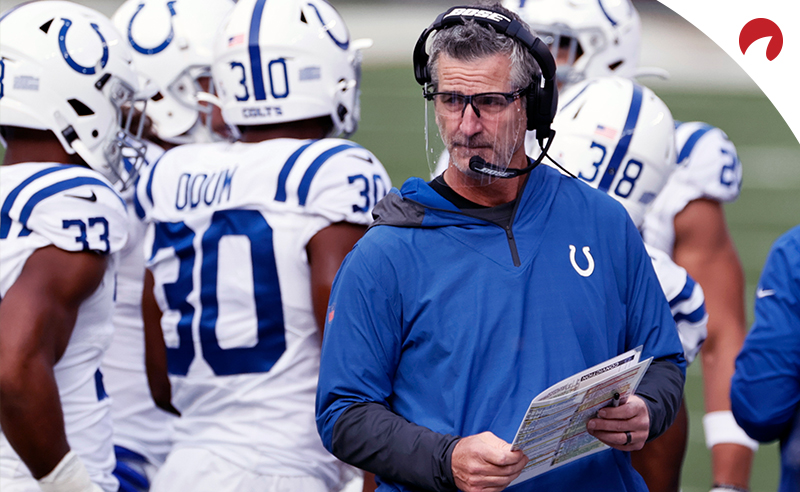 With the announcement yesterday that Philip Rivers is retiring from the NFL, the Indianapolis Colts are in search of a quarterback yet again. Since Andrew Luck retired in August 2019, the Colts have started three quarterbacks over the last two seasons.

Two years ago, Jacoby Brissett was given the starter’s role before he went down with an injury and Brian Hoyer stepped in. Then the Colts signed Rivers to a one-year deal and he led the Colts back to the playoffs this season, only to lose to the Buffalo Bills in the first round.

Now general manager Chris Ballard and head coach Frank Reich have to figure out who their quarterback will be next season and into the future. Online sportsbook BetOnline lists Brissett as the +350 favorite to open the 2021 season as the Colts QB, followed by Carson Wentz (+450), Matthew Stafford (+550), Andy Dalton (+650) and Jacob Eason (+750) to round out the top five choices on the board.

Who Will Be The Next Quarterback In Indianapolis?

Odds as of January 21 at BetOnline

Colts Should Look At A Veteran QB

There are a lot of good options on the board as possible choices to replace Rivers as the starting quarterback of the Colts. Although Brissett has the top odds at +350, I don’t think Ballard will stick with Brissett and will instead look to add a quarterback via trade.

The Colts job would have appeal to any quarterback because of their solid offensive line and the run game behind Jonathan Taylor and perhaps Marlon Mack. Ryan Fitzpatrick is a free agent, and at +1800 odds, he is a possible candidate to land a one-year deal. He was fairly successful playing last year in Miami, first as the Dolphins starter and later in relief of rookie Tua Tagovailoa.

Colts Could Do A Trade-And-Sign

However, I think the Colts will be bolder than most teams in the offseason because they have over $65 million in available cap space. Carson Wentz is another intriguing option at +450, but it sounds like Eagles management is telling any prospective coach who comes into Philadelphia that the team wants to retain Wentz. That’s why I think the Colts’ best option is to make a move for Matt Stafford (+550).

Stafford turns 33 years old on Super Bowl Sunday and he’s a proven NFL quarterback. He was sacked 38 times in Detroit last year, while Rivers was sacked just 19 times behind the Indy offensive line, so this match could be appealing for both sides. Stafford has great arm strength and would fit in perfectly with wideouts T.Y. Hilton and Michael Pittman Jr.

The Colts drafted Jacob Eason, a five-star prospect with a cannon of an arm, in the fourth round last year out of Washington. In his one season with the Huskies, he completed 64.2 percent of his passes for 3,132 yards with 23 touchdowns and eight interceptions.

Colts general manager Ballard had this to say about Eason:

“We drafted Eason last year, who we like. We have to find out a lot more about him. Really the first time we saw Jacob was in training camp and there’s no preseason games, so we are trying to get ready for the season at that point. But we like what we’ve seen from Jacob. We think we really have a really good young talent in him.”

That’s high praise for a young signal-caller. He is currently the only quarterback under contract with the Colts and regardless of who they bring in, he will remain on the roster. He benefited from the veteran presence of Rivers and Brissett this season and he will also have a full offseason to continue to learn the playbook. At +750 odds, Eason is not only a good value pick here, but he is also the safest bet.