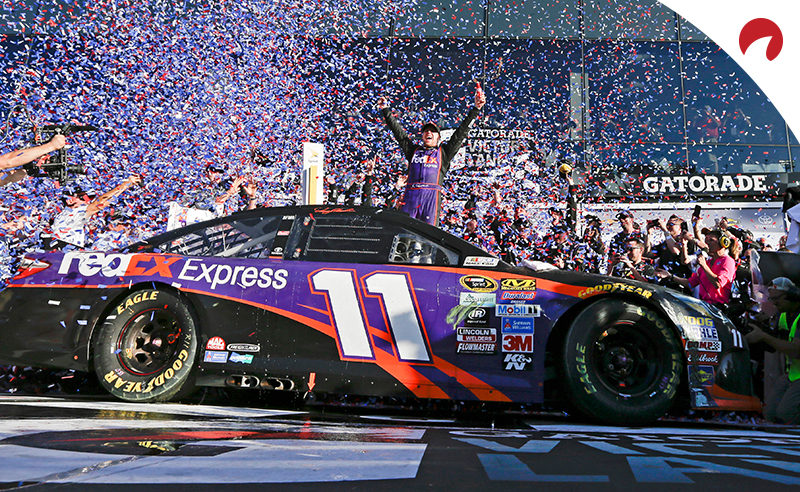 The 2021 NASCAR season is quickly approaching with the 63rd running of the Daytona 500 scheduled for Sunday, February 14. Denny Hamlin has won the last two Great American Races and three of the last five, so rightfully so, No. 11 is at the point in the Daytona 500 odds at +600.

Online sportsbook BetOnline has released its Daytona 500 odds with Hamlin favored at +600. He is followed closely by last year’s points champion, Chase Elliott, at +900, Ryan Blaney at +900, Brad Keselowski at +1100 and Joey Logano at +1100 to round out the top five drivers on the oddsboard.

Unfamiliar with betting on NASCAR? Be sure to check out our handy NASCAR betting guide to help you get in on the racing action.

Odds as of January 21 courtesy of BetOnline

Why is Hamlin the Favorite in Daytona 500 Odds?

As mentioned off the top, Hamlin has won back-to-back Daytona 500s and three of the last five while also having a third-place finish over that span. In fact, over the last 14 runnings at Daytona, including the summer race, he has finished sixth or better nine times, including seven podium finishes. In 30 career starts there, he has led at least one lap in 22 of them.

Last season, Denny finished with the second-most wins in the series at seven (two behind Kevin Harvick), had the second-most top-five finishes (18) and finished fourth in the final playoff standings. Although the Daytona 500 can be a crazy race with typically one major accident, “the big one,” that wipes out half the field, Hamlin’s consistency definitely warrants him being the betting favorite.

Typically for a race, I provide my two favorite picks and a sleeper. However, for the Daytona 500 with longer odds, I will give three picks and a long-shot prediction as well.

Denny Hamlin +600: In most races, the betting favorite is +300 or so. With Hamlin’s tremendous success in the Great American Race recently, getting 6/1 odds is far too inviting not to play him.

William Byron +1600: Well, if you’re going to back last year’s Daytona 500 winner, why not also back the man who drove to victory lane in the summer race there. In just his sixth career start at Daytona, Byron managed to pick up the checkered flag after qualifying sixth.

He has had some struggles at this superspeedway, crashing in three of six runnings, but in the last two races when he didn’t wreck, he has a win and a second-place finish. At 16/1, there’s big value for the 23-year-old.

Ryan Blaney +900: Similar to Byron in that Blaney has run into some bad luck with accidents, but when he’s running, it’s typically near the front. In the last four races he’s completed at Daytona, he has four top-10s, including two second-place finishes.

Additionally, he has led at least one lap in seven of his last eight runnings, and led the most laps in the 2018 Daytona 500. Though he’s never won at Daytona, he’s been in the mix and +900 is worth a shot for him to finally break through.

Extreme sleeper – Bubba Wallace +2500: Now this one may come a little bit out of left field, given that Wallace has exactly zero wins and just three top-fives in his career. That said, two of those top-fives have come at Daytona, including a runner-up finish in the 2018 Daytona 500.

Bubba is part of the new Michael Jordan race team that may provide better gear for him to race in, and since anything can happen at Daytona, why not take a swing at a driver with +2500 odds who has already landed on the podium before.