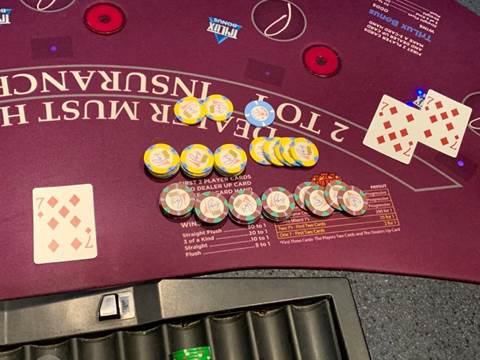 Paris Las Vegas, a Caesars casino, just had another Blazing 7’s Blackjack progressive winner. This time an unnamed player from California won more than $120,000 for th $5 side bet.

Here are the details from Caesars:

On Sunday, January 24, (otherwise known as Championship Sunday) a Caesars Rewards Diamond member had a huge win of their own when they hit the mega jackpot on Blazing 7’s for $120,001 at Paris Las Vegas.

The California man (who chose not to be identified) pulled three 7’s of diamonds just after midnight. The lucky player was already in good spirits before hitting the jackpot as he is expecting a grandchild soon. He plans on sharing his good fortune with his loved ones and spoiling the newest member of his family especially.

You may remember that a player at Paris Las Vegas won a six-figure Blazing 7’s Blackjack progressive jackpot in early December.

Blazing 7’s Blackjack side bet from Scientific Gaming. Here’s a refresher if you’re not familiar with this blackjack game.

Blazing 7’s is a blackjack side bet that pays out based on the number of 7’s the player receives in his or her first three cards. Payouts begin with a player receiving one seven in the first two cards.

The top progressive jackpot is for three suited sevens. Different casinos could designate that a player must have a certain suit to win the grand prize.

Wizard of Odds has a breakdown of the odds and probability of winning a Blazing 7’s side bet. The house edge for this bet is approximately 5%-6%.

Caesars has some of the largest progressive side bets in the country at its Las Vegas casinos.

Side bets at casinos around the country can be as low as $1 and as much as $5 plus the original wager placed. The Caesars jackpots are large for two reasons.

1) The more money that’s in play for each progressive jackpot means there will be a larger progressive.

Blackjack is one of the most popular games which means more people are playing and winning progressive jackpots. This means the jackpot wins won’t be as high as other games. Six-figure jackpots are no joke but they’re also not large by comparison to other games.